Discovering presence of a person regardless of light conditions, weather and type of clothing has been addressed in several ways without robust solutions. Robust discovery of human presence by the unavoidable and tiny chest movement due to respiration is now feasible with the NOVELDA UWB radar. 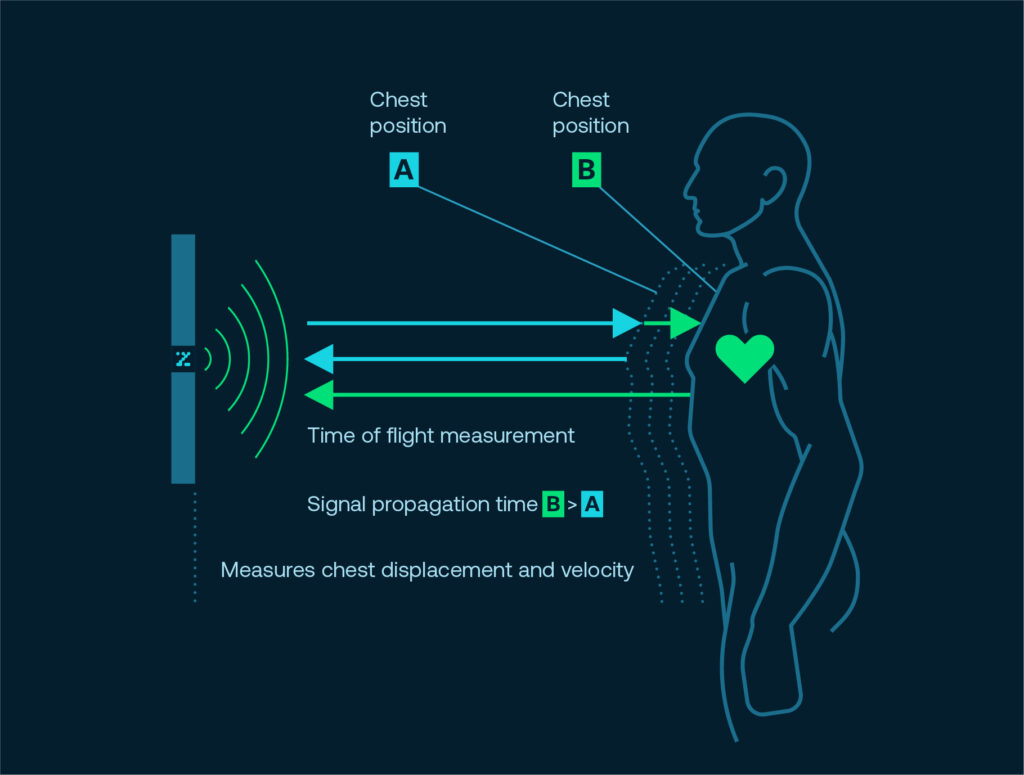 The NOVELDA UWB sensors is measuring the chest movements due to both breathing and heartbeats by transmitting millions of radio pulses and accurately measuring the changes of signal travelling time.

Identifying a person is normally handled by visual inspection combined with some sort of identification paper/card/passport possessed by the individual. Although such systems are in widespread use, the security level is not very high (easy to fake). The idea of using some unique more secure body feature like fingerprints for identification, dates back to mid 1800 and is still in use. Over the years, additional unique human features (often named biometrics) have been explored for identification. We all recognize each other by just looking, primarily in the face, suggesting human identification with cameras is feasible. After years of development of both camera technology as well as required computational power, we are now all using face recognition as identification using our gadgets (laptops, phones, smart homes…). While humans easily identify (known) faces, facial recognition is a challenging pattern recognition problem requiring significant computational resources. In portable systems demanding computational tasks tend to drain the batteries too fast requiring frequent recharging.

However, in real life visual, camera-based face recognition is not always reliable and additional, less intrusive biometrics are sought. Technology for non-contact human vital sign sensing (respiration, heart-beats) is emerging since all living humans must have a beating heart as well as breathing lungs. The largest chest movement is due to breathing and is therefore a good candidate for human presence detection. However, the chest is normally covered with some sort of clothing significantly reducing the visible chest movements. Fortunately, radio waves (often called microwaves at giga-Hertz frequencies) penetrate most clothing, but reflects strongly from the body surface. Using radio waves for measuring movements are usually done with a radar (“Radio Detection And Ranging”). Very weak microwave pulses (1/10000 of mobile phone signal!) are transmitted, penetrating the clothing and reflected from the human body enabling breathing / heart-rate detection.

Next, the radar sensor has to measure rather fine, sub-centimeter chest movement in any environment. Making such a robust radar sensor is challenging, but after years of development, NOVELDA has brought forward a unique and miniaturized Ultra-Wideband (UWB) radar for reliably and fast sensing of human presence. A key feature is the implementation of a complete radar system in standard digital, nanometer technology. The amazing progress of nanometer technology has given us enormous computational power in a few square millimeters sized piece of silicon. These small pieces of silicon cut out of a dinner-plate sized silicon “wafer” are called silicon dies or just “chips” for short. When complete (sensing) systems are engraved on a single die or chip, the term System-on-Chip (SoC) is used.

The NOVELDA X4 chip is a radar SoC containing a complete radar system requiring very few external components. A required external component for any radar is the antenna sending and receiving the transmitted pulses. Traditional antenna tends to be large for sufficient efficiency. However, the unprecedented sensitivity of the X4 chip enable a miniaturized complete human presence detector measuring only 3×30 mm including antennas. The designated sensing area is purposely designed to cover a sector up to 1.6m with a field-of-view of 50° in front of the sensor. We have named our groundbreaking innovation The NOVELDA Human Presence Sensor.

Combining The NOVELDA Human Presence Sensor with camera-based face recognition for personal identification is beneficial in portable, battery-powered systems like laptops, giving minimal standby power use and allow for additional power used for face-recognition. Such systems are already in use in Lenovo Laptops, X1 Nano, X1 Carbon and X1 Yoga enabling automatic locking when you leave the PC and unlock when you return back in front of the screen.

The NOVELDA Human Presence Sensor may be used in several additional situations. Human respiration as “human life” indication may give search and rescue teams advantages during emergency search of large buildings. Rooms with breathing humans will get the highest priority and potentially save lives. The German company, Steinel, has adapted this function as a part of their smart building technology. The “human life” detection is also emerging in other applications like remote monitoring of elderly homes and sensing of life in prison cells. Human presence detection is expected to improve reliability of security systems as well as enabling completely hidden detectors as the radar can operate seamlessly through glass/plastic/wood.

The emerging Internet-of-Things (IoT) technology is often a combination of sensors and actuators. The NOVELDA technology is suitable for adaption to miniaturized IoT gadgets and may add important sensing functionality to emerging robotics sensory systems. Another recent trend is the need for more seamless interaction between humans / users and devices / environment normally referred to as Human-Machine Interaction (HMI). In this context radar sensing technology brings added value beyond presence detection also enabling a natural and seamless interaction based on detecting and classifying motions and gestures.

We expect NOVELDA sensing technology to be integrated in a number of different sensing applications and the next generation NOVELDA Human Presence Sensor will solve even more advanced sensing challenges and use cases.