The Ultra-Wideband or UWB story started two decades ago with FCC opening up for new technological wireless opportunities. In this note we address UWB opportunities and constraints and point out the challenges of implementing
functional UWB technology. 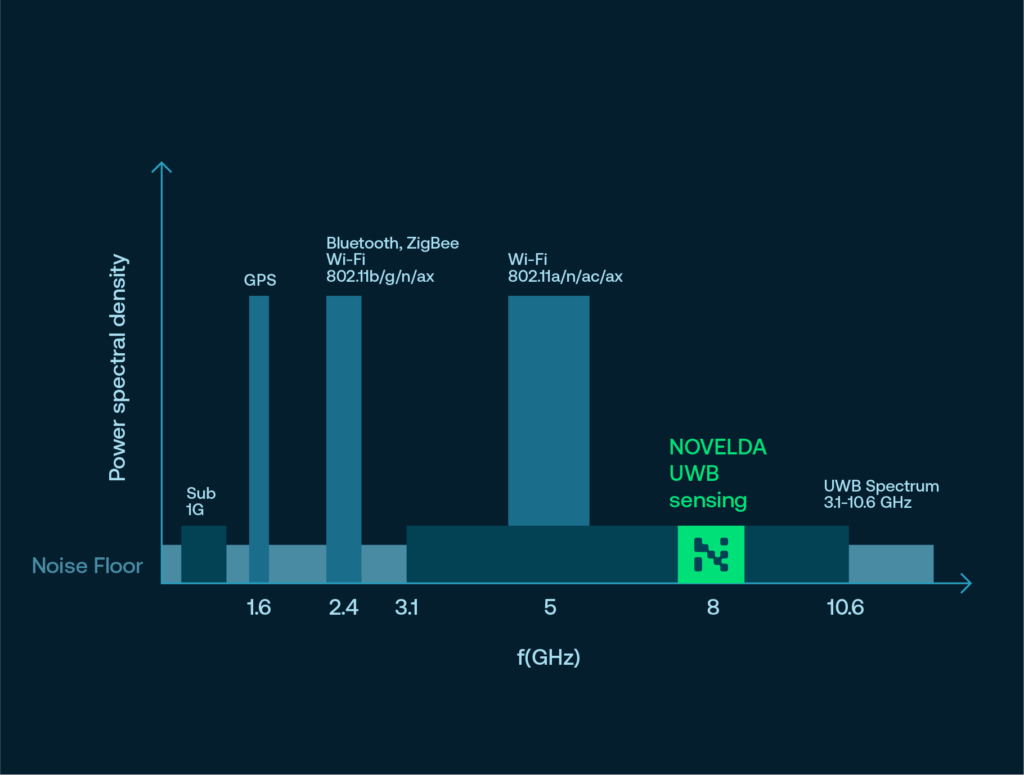 The origin of wireless transmissions was wideband radio signals or sparks as used by Hertz and Marconi for the first radio transmissions (1890s). With limited transmission technology (spark-gap generators) only one transmission at a time was possible. This marvelous new wireless technology developed rapidly to long-distance transmissions but simultaneous transmissions were giving major interference and already in 1910 regulation were underway. At that point each radio transmitter (or “radio station”) was granted exclusive access to radio signal frequencies between two radio frequency limits [flow and fhigh]. The signals transmitted within these two frequency limits are called the available signal frequency bandwidth (flow – fhigh) or simply the bandwidth for the radio station.

Nowadays everything is digital, including radio transmissions. The digital alphabet of ‘1’ and ‘0’ (bits) are encoded as radio signal regardless of information (speech, SMS, web-pages) carried by these bits. Obviously, more bits per second will provide better sound, better images or more information. So, the bit rate or bits per second (bits/s, Mbits/s, Gbits/s) indicate the capacity of the radio channel. Again, this is directly proportional to the available signal bandwidth as for FM radio.

Creative inventors identified early additional use of radio signals. Already in 1904, the German inventor, Christian Hülsmeyer, patented the Telemobiloscope for navigation of ships using the reflection of radio signals from metal. This creative guy invented what was later on called a radar (“RAdio Detection And Ranging”) measuring the distance to some reflective object by observing the time from transmitting the signal to receiving this signal or time-of-flight (ToF) of the radio signal. These first radars were commercialized, but had limited use. Later, especially during World-War II, useful radar systems were built and used by planes and ships for navigation and surveillance. Radar sensing and imaging has since been refined and are today widespread in both military and civil applications. The sensing/imaging quality has improved significantly moving from long-range radar operating at MHz frequencies to shorter range radars operating up to THz (Tera Hertz) frequencies. The sensing resolution improve with higher frequencies and bandwidth, while sensing range decrease due to signal absorption.

Moving into the next millennium, wireless communication as well as wireless sensing has moved from “long-range by few” to “short-range by many”. We all have communicating and sensing gadgets (phones, tablet, laptops….) in use every day. The communication guys were creative. They figured out that microwave ovens frequency bands at 2.4GHz were approved globally and poorly shielded ovens were leaking significant energy allowing for 100mW leakage emission. For short-range communication both bandwidth and signal power were fine at 100mW even for pretty high-rate data transfer. This 2.4GHz signal band (also called “garbage-band”) is still in extensive use for WIFI, Bluetooth and other communication protocols and is now one of the free (unlicensed) ISM (industrial, scientific and medical) frequency bands. Wireless sensing technologies like radar were severely limited by the narrow bandwidth of ISM bands. Accuracy of measured distance is directly proportional to available signal bandwidth, and short-range sensing (<10m) with one-meter resolution does not make sense.

During the late nineties some interesting work was reported for radar sensing measuring time with pulsed RF signals, similar to sparks used by Hertz and Marconi in the old days of radio. Then something quite unexpected happened. The US Federal Communications Commission (FCC) announced in 2000 an ultra-wide frequency band (UWB) from 3.1GHz to 10.6GHz for unlicensed use. 7.5GHz bandwidth available for free use was unheard of and fantastic. The communication guys were enthusiastic and most of the big communication companies jumped on the UWB-wagon for making the fastest communication solution that would beat anything else. With background in narrow-band radio communication, they modified existing techniques to higher transfer rate getting something in the range of 500MHz bandwidth. However, these UWB systems merely worked at very short distance and towards 2010 most of these efforts was stopped declaring “UWB is dead”.

What went wrong? Well, they did not account for the extremely low signal levels allowed. As for microwave ovens there are regulations of emission from all electric devices (fridges, shavers, dishwashers,…) known as the “Part 15” limit which is also the maximum signal power limit for UWB transmissions. So, the fantastic UWB, was not so fantastic after all, at least not for communication.

For radar systems, the increase unlicensed bandwidth provided by UWB regulations solved the fundamental range resolution limitation, but the strict power limitations made radar sensors really challenging to implement. However, NOVELDA started to work out new solutions suited for modern digital technology (CMOS) in joint efforts with Department of Informatics, University of Oslo, Norway. The first reported pulsed UWB radar System-on-Chip (SoC) was successfully created and reported in the MSc-thesis by H. A. Hjortland under supervision of T. S. Lande in 2006. Several new design principles enabled recovery of extremely weak pulses virtually buried in noise. A fully functional, short-range UWB radar system compliant with the “Part 15” power limit was created, so, UWB was not dead after all!

Based on the research prototype additional innovation and engineering by the NOVELDA design team brought forward a highly sensitive radar SoCs implemented in nanometer CMOS technology providing miniaturized systems working at low power. Aiming for a global market, NOVELDA technology was adapted to world-wide radio signal regulations. The generous 7.5GHz ultrawide band granted by FCC in USA was not adapted by the rest of the world. The somewhat reduced bandwidth from 6GHz to 8.5GHz in now adopted worldwide (with a few manageable exceptions) allowing a 2.5GHz bandwidth for unlicensed use world-wide.

The X4 CMOS radar system by NOVELDA is the first working UWB SoC fully compliant for unlicensed global use.

² The UWB term is generic and several ultra-wide bands are available at higher frequencies (i.e. millimeter waves), but in this note we concentrate on the UWB available at microwave frequencies.