The development of the NOVELDA UWB radar technology was a challenging endeavor requiring innovation based on deep understanding of radar fundamentals, signal processing and innovative engineering in modern digital technology (CMOS). 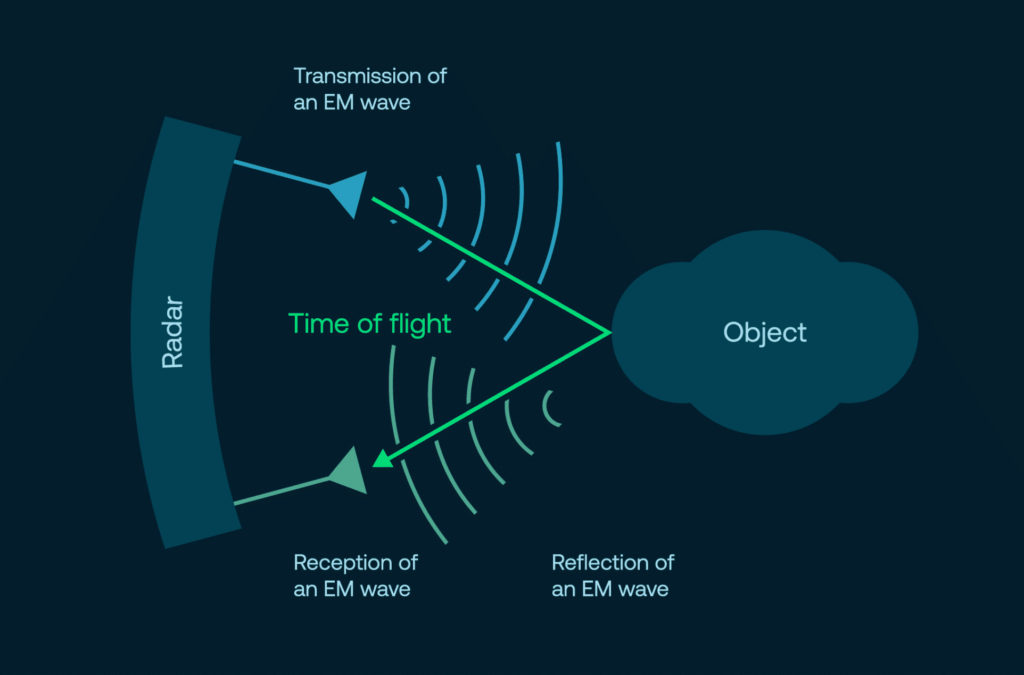 Already in 1904, the German inventor, Christian Hülsmeyer, patented the Telemobiloscope for navigation of ships using the reflection of radio signals from metal. This creative guy invented what was later on called a radar –(“RAdio Detection And Ranging”).

The fundamental principle of radar is emission of radio frequency (RF) waves and measure the time it takes for these RF waves to reflect back from certain object. The signal travelling time from leaving the radar until reflecting back to the radar is proportional to the distance to the reflected object, often named time-of-flight (ToF). Measuring ToF for the signal seems like a simple thing to do, but because the RF waves propagate close to the speed of light (c≈300 000 000m/s) measuring something moving this fast accurately is really hard and require highly sophisticated and often power intensive electronics.

Radar sensing features – why do we need radar?

The key to understanding the advantage of radar sensing lies in the property of the waves. As most contactless sensors, radars use electromagnetic (EM) signals in the radio frequency range. The fundamentals of EM wave propagation are kind of complicated, so let us just state that interaction between electric and magnetic fields may generate travelling EM waves in space. Think of these waves like waves on the water and we clearly observe water waves are travelling when they hit the beach and break up and dissolves. These waves of water clearly transfer energy as sand and sometimes even stones are moved around by the waves. Observing more closely we find open sea waves of different sizes mixed together. Some are small and more frequent, while larger waves are often less frequent.

A unique feature of the NOVELDA radar is the ability to recover weak, reflected radar signals mostly buried in noise.

Travelling electromagnetic waves are very similar. They are moving in space/air instead of water and are carrying EM energy. They have different signal strengths and appear at different frequencies often mixed together in a confusing pattern.

We are familiar with EM waves from electric wall outlets powering our indoor facilities. Typically, the signal voltage is 230V with 50Hz frequency. This energy is transferred through highly conductive copper wires and emission of travelling EM waves is close to nothing.

In order to generate traveling EM waves in space or air, some sort of “generator” is required. It turns out that different generators are required for EM waves at different frequencies. Perhaps a familiar EM wave generator is the filament light bulb using heat to generate light. A glowing tungsten wire lights up when connected to power wires and emit EM waves larger than 300 000 GHz, or simply light signals. The light spreads and hits some surfaces exposing our surrounding when light energy is bounced back to our eyes. Now, the light source (bulb) emit white light but different colors are visible to our eyes showing that different properties of the reflecting object make them appear with different colors.

Radio frequency waves (RF) are in the range from 20kHz to 300GHz and are behaving much like light waves, but interact very differently with surroundings.

Lower RF frequency waves may travel long distances and was explored in the early days of radio for overseas radio signal transmissions. Fortunately, upper atmospheric layers reflected the signal and made it bend around the Earth. As better radio technology was developed, higher frequency radio signals could be generated, but absorption in air increased with frequency reducing receivable distance. These days GHz or microwave radio signals are explored for mobile and short-range communication with less coverage.

An interesting property of RF signals is the ability to pass through different materials enabling us to listen to radio or use our mobile phone inside our houses.
RF signals are in fact quite challenging to control and tend to sneak in anywhere. They partly penetrate through and partly bounce off different materials.

Surprisingly, some solid materials like wood are quite transparent, while quite transparent water does not let any RF signal through, most of the transmitted signal is reflected. From a sensing perspective, the penetration properties of RF signals were advantageous for early radar systems enabling navigation with ships and planes in the dark regardless of weather conditions. Solids, like stone or main land were good reflectors.

Also (enemy) vessels or planes of metal were clearly visible. These days great efforts are made for making military equipment invisible for radar detection (stealth technology).

Primary vital signs are considered to be heart rate and respiration rate and is normally measured with contact sensing. However, the human breathing action imply chest movements less than 1 centimeter and these movements are detectable with short-range radar. Actually, the radar signals easily penetrate most human clothing while the human body is a strong reflector (70% water content). So, short-range radars are exceptionally well suited for respiration sensing and may be used for detection of human presence (more detail in the “Human presence detection” NOVELDA story). Additional portable applications like handheld devices for inspecting walls in buildings and even sensing humans through the wall are also reported.

The ultimate implementation of a radar system would be to make a high-quality radar in standard digital microelectronics including dedicated processing solutions embedded on the same chip (System-on-Chip, SoC). In this way the radar system would be miniaturized, power consumption reduced and the ever-increasing computational speed of modern technology could be explored. Turns out making a high-quality radar system in standard digital technology is hard since weak, microwave UWB signals must be transmitted and received at low supply voltages (1V).

Based on early radar development at Department of Informatics (Hjortland & Lande) the first single-chip radar system, called X1, was brought forward by NOVELDA in 2010 demonstrating the feasibility of SoC radar in CMOS (i.e. standard digital technology).

A unique feature of the NOVELDA radar is the ability to recover weak, reflected radar signals mostly buried in noise. The technique explored by NOVELDA is termed “Processing Gain” were many pulses are combined systematically for improved signal quality. In fact, the high speed enabled by modern technology allow for excessive processing gain and the NOVELDA X4 radar SoC is capable of transmitting up to 60 million pulses each second! In this way radar pulses reflected back up to 10 meters are reliably received.

An additional feature of the NOVELDA radar 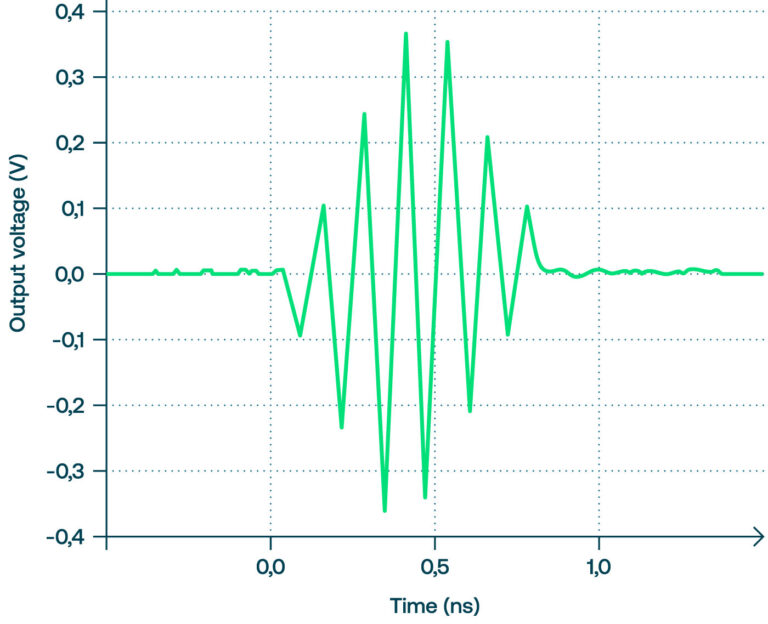 A radio signal is transmitted from the radar antenna and reflected back from surrounding objects. Accurate measure-ment of ToF indicate the distance to the reflected object.

technology is the unique combination of static measurement of distance and dynamic sensing of small movements. Such radars are called coherent radars and the excessive processing gain enable detection of sub-millimeter movements. The coherent reception of radar pulses makes the NOVELDA radar SoC very capable for vital sign sensing and a single radar unit may monitor several persons simultaneously.

The X4 SoC has been demonstrated to sense heartbeats by measuring vibrations less than 0.3mm on the chest.

An important property of contactless sensing is the quality of the received signal, simply because the precision of the measurements improves with signal quality. Unfortunately, maximizing signal quality may require more power (i.e. batteries), larges size and/or increased production cost. 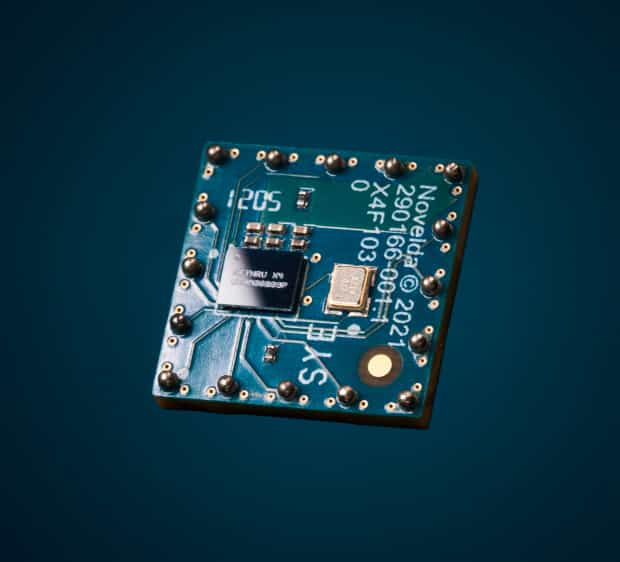 The NOVELDA radar technology is an unconventional and exceptional radar system with market-leading flexibility in functionality, power use and size, and is also compliant to world-wide UWB regulations to enable global use of product using our technology. Our X4 radar SoC is already explored in several high-volume products world-wide.